My current research is on Hamlet in late-communist and post-communist society, so it’s jolly good of my friend Aneta Mancewitz to co-ordinate a panel discussion especially for me! (So, okay, not really just for me…)

It will be wonderful to meet up again with Dr. Nicoleta Cinpoes, who organised the Worldwide Hamlet conference in Craiova in 2009 where I first met many of these people.  As people gave their papers in that industrial Romanian city, which also hosts a major international Shakespeare festival every two years (and we act like the World Shakespeare Festival was a new idea!), there were definite recurring themes – of which Hamlet and the legacy of 1989 in post-communist spaces was particularly potent. 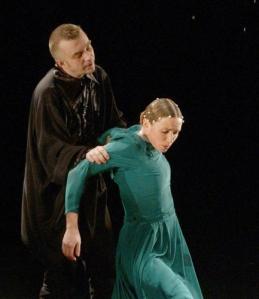 The importance of Eastern European reconfigurings of Hamlet was illustrated during the Globe to Globe Festival when Shakespeare’s most famous play was performed, not by the Brits, but by the Lithuanians (left).  My blog review of Nekrosius’ Hamlet can be read here. My performance review of a Polish Hamlet directed by Monika Pęcikiewicz is forthcoming in the journal Shakespeare and is published online already.  If you would like a free copy please contact me and I will send you the link.  It originally started life as a couple of Shakespeare Travels blogposts, of course.

Other speakers will include the ever eloquent Prof. Dr. Boika Sokolova,  Dr. Sonia Massai, and Aneta  herself, among others.