A more formal review by me of this production is published in the journal Shakespeare, Volume 8, Issue 4, 2012 available by clicking here

This production was the most controversial of the four I saw at the Hamlet themed International Shakespeare Festival in Craiova, Romania, with many at the conference reacting against it violently.  Personally, I found it disturbing and thought-provoking.  Like the Shanghai Theatre Academy’s adaptation, it was a very young production (the oldest cast member looked as if he was in his thirties); unlike the Shanghai adaptation, it didn’t struggle with transgressing the boundaries of traditional culture. In fact, it embraced transgression, as suggested by its neo-noir comics mise-en-scene.  Many saw this transgression as ‘gratuitous’ and ‘crude’.  However, having just returned from two weeks in Poland, where I was on Erasmus Teaching Mobility at the University of Silesia, my impression was that this production was doing something more than simply trying to shock.  Of course, it was trying to shock, too: there was nudity, simulated sex (quite a lot of simulated sex), and bucket-loads of blood.  However, the director’s last Shakespeare had been Titus Andronicus and the parallels between Ophelia and Lavinia were strongly drawn.  Sex is power: power is sex seemed to be the motto of the court of Denmark, and Gertrude, with her conical breasts and phallic beehive was its dominatrix, the queen of sadomasochistic sexploitation. The children, Hamlet, Ophelia and Laertes, were dull inconveniences in their parents’ lives.

Perhaps not Ophelia. The dark underside of this celebration of lasciviousness became apparent as Laertes left for France.  Polonius, who for a moment I thought was a priest because he wore a white collar under a black shirt, tore the siblings apart. He held Ophelia centre stage, fondling his daughter’s stomach, and then later, accidentally on purpose, his hand brushed her breast.  At this point I wanted to be sick.  Laertes left, powerless to help his sister.  Later, when Ophelia was loosed on Hamlet by her father and the king, she begged Gertrude to help her, but Gertrude, like the Queen of the Goths, walked away and left her to her fate.  Ophelia, instead of reading a prayer book was commanded by her father to strip for the bemused Hamlet.  Then, naked except for her knickers, she suddenly ran off stage, Hamlet running after her calling the actress’ name: Anna.  The actress (scripted of course) refused to play the role, to participate in this exploitation, not only of Ophelia’s body, but also of her own body for entertainment.  She eventually returned to finish the scene, wearing Hamlet’s jacket.  I found it incredible that some in the audience later described this production as all very clever but having no feeling.  When Ophelia lay on the floor and screamed with rage and pain, I knew exactly where she was coming from.  When she stood up again, she had decided to act.

Ophelia decentralised Hamlet to the extent that she spoke his ‘To be or not to be’ soliloquy, and then feigned his madness.  In the most argued about scene in the play, Ophelia entered Claudius and Gertrude’s bathroom ‘mad’.  Blood gushed from between her legs and she repeatedly stabbed herself, whilst playfully skidding around in the gore.  But when Claudius and Gertrude eventually left in disgust, she snapped out of it and revealed that her dagger was from a joke shop, and that the blood was fake.  She shared the joke with Horatio, while they both smoked cigarettes and chatted.  One of the delegates complained that at this point the production had descended into parody, but I think it was simply illustrating that Ophelia, like Hamlet, could also put on an ‘antic disposition’. And even if it was parody, it didn’t last long.  As Ophelia sat on the edge of the bath, Horatio came up from behind and drowned her.  She hadn’t won after all.  Unfortunately, the surtitles were only in Romanian so I had to rely on other people’s understanding.  ‘Horatio was a double agent, working for Claudius’ said one.  ‘Horatio couldn’t stand to see Ophelia like that any longer, so killed her,’ said another. Either way, this Electra was silenced. (See my blog on Hamletmachine, Ophelia and Electra here.) 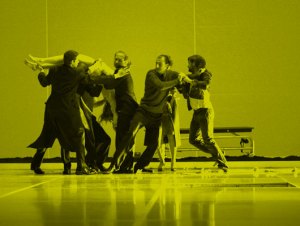 Gertrude was the most interesting interpretation I have seen for a long time.  Apparently in control, again referencing the Queen of the Goths in Titus Andronicus, her sexual appetite turned out to be no more than the result of her own grooming by a society that saw women as objects.  She reminded me of Gilda in Woman on the Edge of Time by the end. It wasn’t only women who were exploited in this production, however.  Like the Shanghai Theatre Academy, Rosencrantz was also singled out for special abuse by Hamlet.  In the Chinese production, this abuse was possibly linked to the fact that she was played by a woman, and could be interpreted as part of a larger misogynistic attack.  In Polski Theatre’s imagining, Rosencrantz and Guildenstern are part of the SM underworld.  Rosencrantz, the weakest character, has already fallen victim to Guildenstern and the Players.  His brutalisation by the previously meek Hamlet was (intentionally) sickening, and immediately preceded his violent attack on his mother, Gertrude, in which he attempted to sodomise her.

There was neither an opening scene nor a final act in this production.  Instead, the main characters sat on chairs in a row in front of the curtain, while a voiceover told the events.  I couldn’t help wondering if this had been so in earlier stagings of this performance, or whether, only two weeks after the Polish aircrash that had claimed the lives of Poland’s political and military leaders and leading figures in its arts, culture and society, the sight of a stage strewn with the bodies of an entire court would have seemed an act of tastelessness too far.

Interviews and clips in Polish available from (any translations would be gratefully received and acknowledged):

4 thoughts on “Ophelia does a Hamlet: Polski Theatre (Poland)”